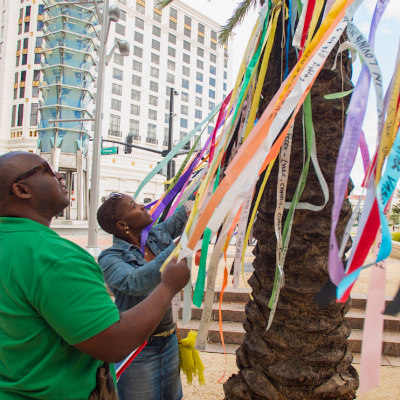 The City of Orlando invites the Provincetown Community Compact to the commemoration of the June 12, 2016 Pulse nightclub massacre; a special strand of Prayer Ribbons will be installed at Orlando City Hall

Provincetown, MA. The Provincetown Community Compact has once again been invited by The City of Orlando, Florida to install the Prayer Ribbons memorializing the victims of the 2016 Pulse Nightclub Massacre outside Orlando City Hall. A private gathering will be held with Orlando Mayor Buddy Dyer, City Commissioners and employees, LGBTQ+ leaders and the Pulse family for a minute of silence to remember the 49 victims of this mass shooting. Jay Critchley, director of the Provincetown Community Compact, will speak along with community leaders.

The Prayer Ribbons will be on public view outside Orlando City Hall from June 10-17, 2022.

At the time of the shooting the community of Provincetown felt a special kinship with the city of Orlando and an urgency to respond to such unimaginable gun violence against the LGBTQ community. To honor the victims, The Compact arranged a ceremony at Provincetown Town Hall where each person’s name was inscribed in gold on a black ribbon and added to the Prayer Ribbons, a project of The Compact and the Provincetown Swim for Life. An additional ribbon was dedicated to those injured.

In November of 2016, The Compact was invited by Frank Billingsley, Chief of Staff to Mayor Dyer to bring this strand of the Prayer Ribbons to the city of Orlando. They were installed at beautiful Leu Gardens at a gathering of families of the victims and then outside Orlando City Hall.

In the invitation to The Compact in 2016, Mayor Dyer writes: “The Prayer Ribbons were another reminder for our residents that communities around the nation were standing with us during a difficult time. Having the Prayer Ribbons return to Orlando would help our city continue the healing process and provide another way to celebrate the unity of our community and inclusive communities like Provincetown.”

The Prayer Ribbons were initiated in 1993 at the Provincetown Swim for Life to provide a visual witness to the swimmers and the community devastated by HIV/AIDS, each swimmer with their own personal images, hopes and fears. All are invited to inscribe the names of those they love on one of the five-foot long colored ribbons – and personal messages – to those they wish to celebrate in their lives, both living and deceased.

The Prayer Ribbons challenge us to live our lives more fully and joyfully. They create a visual statement that broadens and elaborates on Provincetown’s legacy as a community with an historic global reach of inclusion, and acknowledges that differences create richness.